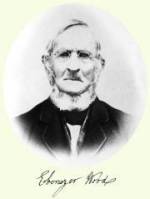 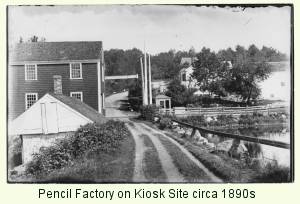 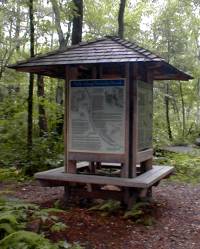 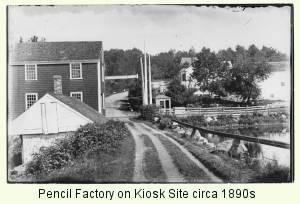 American pencil making began in the early years of the 1800s when, it is believed, a Medford woman constructed the first American pencils by removing the pith of alder twigs with a knitting needle and filling them with a mixture of arabic glue and graphite. The first to construct pencils for New England trade was a young Concordian named David Hubbard, but according to Actonian Horace Hosmer, the pencils “were of little value, and but few of them were manufactured.”

In 1812, another Concordian, David Munroe, created a better product by mixing the lead, or plumbago, with an adhesive substance, and spreading the soft paste into grooves cut into a cedar casing, leaving them to dry. The slabs were then sealed with a thin cedar veneer, and the individual pencils were cut from the slab, each slab generating four to ten pencils. Munroe’s pencil factory was located along Concord’s Mill Dam.

Munroe hired the journeyman and cabinet maker, Ebenezer Wood, to help him operate the two-man saw used to cut slab and veneers from cedar logs. Wood showed a talent for inventing, and was able to mechanize the production of pencils in Munroe’s factory and to develop the techniques which allowed Munroe to automate and thereby increase production for the Boston market.

Henry David Thoreau, Wood’s contemporary and a fellow pencil maker, was initiated into the trade by his father, John Thoreau. John Thoreau’s brother-in-law, Charles Dunbar, had discovered a deposit of high quality plumbago in Bristol, New Hampshire, and set up the business, Dunbar and Stow. Dunbar mined plumbago in large quantities, and wishing to expand the business, invited John Thoreau to join him in 1823. The partnership eventually disbanded, and the firm was re-named John Thoreau & Company. Thoreau & Co. produced pencils of sufficient quality to be sold in the Boston market.

Thoreau and Munroe became fierce competitors, and since both firms had their plumbago ground at Ebenezer Wood’s mill, Munroe attempted to convince Wood not to continue grinding Thoreau’s material. However, because Thoreau’s business was larger and more lucrative for Wood, it was Munroe’s plumbago grinding which was eventually curtailed.

All of the early pencil makers attempted to replicate the refined techniques of the Europeans, especially that of the Frenchman, Nicolas-Jacques Conté, who invented a process for producing high quality pencils in 1795. Secrecy prevailed among the American pencil makers as each experimented with different techniques and mixtures.

Ebenezer Wood was a cabinet maker, inventor, Mason, veteran of the War of 1812, and a gentleman. In 1835 he was Acton’s town moderator. The 1800s witnessed a national boom in pencils because of new construction techniques that were developed in Concord and Acton, and Ebenezer Wood played a key role in this technological development. Pencil making was the high-tech business of the day.

Munroe’s early methods were slow and painstaking, so he hired Wood to develop mechanized ways of automating pencil production. According to Wood’s contemporary, Acton’s Horace Hosmer, Ebenezer Wood “stands in the very front rank of American pencil makers.” Wood set up the first circular saw used in the production of pencils which, Hosmer writes, “was a great curiosity for a long time.” Using the principle of the circular saw, Wood was able to cut six grooves at a time in a rapid fashion, and he also invented a molding and trimming machine and a wedge press that could glue 12 gross of pencils at a time, significantly boosting production. According to Hosmer, Ebenezer Wood “was an inventor of high order, and his hand and brain largely helped to make Munroe’s fortune.”

Ebenezer Wood constructed the first hexagon and octagon shaped cases for pencils, and thus is the inventor of the modern style of pencil that we have today. Rather than glue a thin veneer onto the slab, Wood glued two four-sided shafts together to make his pencils.

However, rather than patent his inventions and techniques, Wood shared them freely with all who sought his help, and at least one such machine was built by the New York company, Eberhardt Faber, which would soon become a leader in pencil production.

Wood became known for his high quality plumbago (or lead), which he ground with a millstone, harnessing Nashoba Brook as his power source. Such was the quality of the plumbago that Mrs. John Thoreau would purchase all her plumbago from him for their own pencil factory in Concord. The Thoreaus’ process of making pencil lead was highly secretive, and the mixture of graphite mineral and clay was burnt to harden instead of being air dried, as was Munroe’s technique.

While little is known of Ebenezer Wood’s life, Hosmer characterized Wood as a gentleman who appreciated letters, writing that even when Wood was 80 years old he would commit to memory ” long poetical articles which he found in magazines and newspapers.” At one point in his career, Hosmer even rented Wood’s factory.