Location:  Northeastern Acton, off Pope Road, toward Concord and Carlisle

Spring Hill Conservation Land is the middle property of three contiguous conservation lands totaling over 400 acres of preserved wildlife habitat that form Acton’s largest protected natural area. Each property has its own yellow loop trail, separate entrances, kiosk(s), and parking. Two short red-blazed trails connect the easterly side of the Spring Hill loop trail to the Camp Acton loop trail, and two other short red-blazed trails connect the westerly side of the Spring Hill loop trail to the Nashoba Brook loop trail, and Robbins Mill Trails. It is possible to complete a circuit of nearly 6+ miles through these four conservation lands through dense woodlands while crossing from Pope Road on the east to Route 27 on the west. Because of the size of this property, “You Are Here” maps have been posted on trees at various locations along the loop trail. Besides Camp Acton’s, Robbins Mill and Nashoba Brook separate maps, there is a composite map showing all four parcels.

One red access trail begins at the Spring Hill Road entrance. An interesting feature is a short side loop on the northern side of the trail that winds through a group of stone piles, which are thought to be of Native American origin and to have been constructed for some ceremonial purpose, although they are not considered to be burial sites. More such piles are highlighted in Nashoba Brook Conservation Land as part of the Trail Through Time  and an educational panel describing the site has been installed.  This trail is marked at both ends by a sign with a small icon of three circles in a triangular arrangement.

The access trail joins the lengthy yellow loop trail near the Jay Lane access and the two connectors from Camp Acton. Used extensively by hikers, bikers, joggers, dog-walkers and cross-country skiers, this loop trail forms an irregularly shaped double “U,” with the inner part of the trail skirting both sides of a long, narrow wetlands area. A 70-foot boardwalk on the trail’s innermost curve crosses the most interior part of this wetlands. Two blue secondary trails that transect the main yellow loop trail make possible shorter circuits of this property, whose loop and access trails are longer than most such trails. One of these, just east of the boardwalk, connects the loop trail’s inner and outer curves at their midpoints, while the other provides an even shorter circuit at the easternmost curve of the yellow trail, near the Spring Hill Road entrance. On the western side of the outer “U” are the two short trails connecting to the Nashoba Brook land.

The one-mile access trail from the Jay Lane entrance descends from Strawberry Hill and passes through a predominantly upland area with extensive stands of beech and hemlock that extends into the hemlock-swamp lowlands. The trail continues across low, level terrain where the flora include a thicket of water-loving sweet pepperbush, whose fragrant white blossom-spikes scent the air in mid- to late summer. After crossing a short boardwalk, this access trail, paralleling old stone walls for most of its length, joins the main Spring Hill loop trail close to the access trail from the property’s main entrance.

The longest Acton segment of the Bay Circuit Trail (BCT) passes through the Spring Hill property, crossing its boundary with Nashoba Brook Conservation Land via a short red connector marked with a sign, and passing along the Jay Lane access trail to the road. Between these two points, the BCT follows the more easterly portion of the yellow trail. BCT-logo patches mark this trail at the junctions, and white blazes are used along the trail. On the map it is marked in white. The BCT connects with the Nashoba Brook Conservation Land on the east and with the Stoneymeade Conservation Land, via Strawberry Hill Road and Pope Road, on the south.

Largely buffered from the sound of traffic along Route 27 by the Nashoba Brook Conservation Land, Spring Hill is a pleasant, quiet, relatively level woodland area covered with a deciduous woods of red and white oak, red maple, and black and white birch. A scattering of beech, larch, hemlock, and white pine may be seen throughout. On the forest floor is a distinct community of ground covers, including ferns, mosses, partridgeberry, princess pine, and several other members of the club-moss family, all of which are indigenous to wet or heavily shaded areas. The understory vegetation is dominated by high- and lowbush blueberry and swamp azalea. Geologically, Spring Hill is uncharacteristic of most of Acton’s conservation lands (including the adjacent Nashoba Brook and Camp Acton lands) in that it is almost without rock outcrops, ledges, or large boulders. However, there are numerous glacial rock gardens scattered throughout the property. 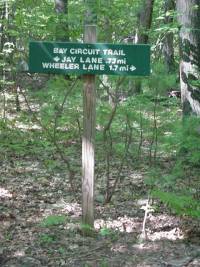