More on the Pencil Factory site

Photos of the Stone Chamber restoration

Location: North Acton on easterly side of Main Street (Route 27), toward Westford and Carlisle

Terrain/Trail Conditions: Variable, from fairly smooth and wide to narrow and stony or crisscrossed by tree roots; minor hilliness on southeasterly section of loop trail; occasional wet areas, even in upland sections

Nashoba Brook Conservation Land is one of four contiguous conservation lands totaling over 500 acres that form Acton’s largest protected natural area. Each property has its own yellow loop trail, separate entrances, kiosk(s), and parking. Two short red-blazed trails connect the Nashoba Brook loop trail to the westerly side of the Spring Hill Conservation Land loop trail, which connects in turn to the Robbins Mill and Camp Acton Conservation Lands. It is possible to complete a circuit through dense woodlands of nearly 6 miles from Camp Acton’s Pope Road entrance on the east to Nashoba Brook’s Route 27 entrance on the west. Besides Camp Acton’s separate map, there is a composite map showing all four parcels. Combined North Acton Trails Map

Nashoba Brook Conservation Land is a very scenic area owing to the unspoiled Nashoba Brook, which runs through it from north to south. The streambed provides diverse riverine habitats—still water, marshland, and small rapids—each attracting its particular complex of species. The upland habitat is varied as well, with stands of softwoods and hardwoods, lower brushy vegetation, and small streams that make their way toward the main brook.

This property is notable among Acton conservation lands for its abundant and varied human artifacts, both historic and prehistoric. Most prominent is the exceptional stone masonry associated with the foundations and sluiceways of two early mills, a farmhouse foundation, remains of a barn, two earth-filled dams, and a post-and-lintel stone chamber. Located along the yellow loop trail, these archaeological features are also part of a specially designated Trail Through Time  that is currently being developed with grants from the Town’s Community Preservation Act funds. Another variety of artifact—in addition to the ubiquitous stone walls of pre-Columbian through post-colonial origin that crisscross the property—are numerous clusters of stone piles scattered throughout the woods in North Acton and several nearby towns. These are generally considered to be of Native American origin and their purpose to be ceremonial, although they are not considered to be burial sites. One such cluster that is located near the yellow loop trail is included in the Trail Through Time and several others will be included later. Two educational kiosks discussing some of these sites and artifacts have been erected thus far and several others are planned. Green blazes mark the short trails through  some of these stone pile sites.   In addition, square blazes marked with “TTT” have been added to the standard painted trail blazes to connect the sites that have been developed to date. 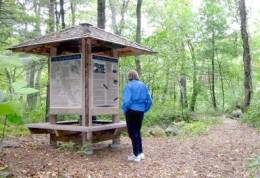 Two main entrances, at Wheeler Lane and Davis Road, mark the ends of two approximately equal sides of an elongated yellow loop trail. This trail parallels the brook on both sides and crosses it twice. Nashoba Brook Conservation Land may also be accessed from two locations along Milldam Road and via either of two red connectors coming from the Spring Hill yellow loop trail. One blue crossover trail connects the two sides of the loop trail near the pencil factory educational kiosk.

At the Wheeler Lane parking lot and the small open field nearby, a complex of stone sluiceways and foundations marks the site of the Wheeler Mill, one of at least four mill sites along the brook that operated during the 1700s and 1800s. The northernmost of these, at the end of Wheeler Lane, in 1732 comprised “a dwelling house, barn, grist mill, and saw mill erected by a Captain Thomas Wheeler, formerly of Concord.” North of the sluiceways is the Robbins Mill Pond and dam, below which is a short rapids. Beside the parking area is the Wheeler farmstead cellar hole. This site is currently being reconstructed as part of the Trail Through Time.

Starting the yellow loop trail from this site and staying on the west side of the brook, the trail heads in a southerly direction, passing through a short section of double, serpentine-shaped stone walls once used as a droving corridor for cattle transiting between pens and pasture. The trail then descends to and follows the brook as it widens into a marshland for a short stretch before returning to a well-defined streambed. The terrain along this stretch is particularly rocky. The trail then passes beside the stone chamber. Built into a hillside, this chamber is referred to as the “Potato Cave” by those who believe colonial farmers built it for storing root crops, while others assert that Native Americans built such chambers, which are found throughout the Northeast, for ceremonial and astronomical purposes. This chamber was studied and reconstructed in 2006 and includes an educational kiosk. 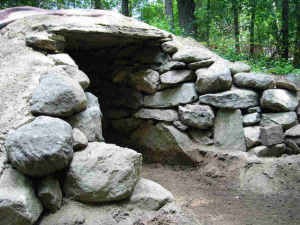 After crossing the brook on a sturdy footbridge, the trail leads to the property’s second mill site, where Ebenezer Wood, a competitor of Concord’s Thoreau family, operated a 19th-century pencil factory. Here the brook forms a small waterfall at the ruined dam. A kiosk at the site presents information about the history and ecology of the area.

The remainder of the loop trail, after passing the Davis Road entrance and crossing a small field beyond the parking lot, proceeds northerly through a mixed upland forest. The trail crosses several tiny seasonal streams and wet areas on short boardwalks or stepping stones and passes the two junctions where red connector trails lead into the Spring Hill Conservation Land. Also along this stretch of trail is a short side trail that winds among one of the clusters of Native American stone piles. After a quick descent to the second footbridge over the brook, the trail returns to the Wheeler Lane parking lot.

In addition to the Trail Through Time, the Bay Circuit Trail (BCT) also makes use of this conservation land, following the west side of the loop trail from Wheeler Lane to Davis Road and then along the main trail’s upland portion to the first red connector into the Spring Hill Conservation Land. North of the Wheeler Lane entrance, the BCT follows Route 27 to the Nashoba Sportsman’s Club, where it enters the woods and joins the Bruce Freeman Rail Trail. Changes are being planned, however, to move the trail into the woods to avoid all of the portion now following Route 27. BCT logo patches mark this trail at the junctions, and white blazes are used along the trail. On the map it is marked in white.