Pratts Brook Conservation Land comprises wetlands, forested uplands, a blueberry “barrens,” two brooks, and a small pond with nearby vernal pools. Pratts Brook, which bisects the property, enters west of the Valley Road access as a briskly flowing stream that soon spreads out into multiple channels through the broad wetlands before plunging down a rocky slope to join Fort Pond Brook just outside the property’s southeastern boundary. Prominent in this central wetlands are a variety of fern species, including cinnamon, royal, Boston, hay-scented, sensitive, and interrupted, together with skunk cabbages and red maple.

The trail system consists of a yellow loop trail, three blue secondary trails plus one secondary trail that is unblazed because it is in an open area, and three red access trails. The loop trail roughly follows the property’s perimeter.

The most heavily used access, from the Parker Street entrance, follows a narrow conservation corridor between homes, passing an abandoned, stone-lined well before arriving at the loop trail in a stately stand of old white pines. Proceeding clockwise along the loop trail from this point, the trail passes through uplands wooded predominantly with white pine, red oak, and pitch pine, with occasional specimens of American hornbeam (also called ironwood or blue beech), notable for its smooth, sinewy bark. The trail soon reaches a footbridge across the small outlet stream from Tenney Circle Pond that meanders through the property’s southern portion before joining Pratts Brook. The loop trail, which then passes over a series of hilly shoulders that slope down into the wetlands, is here particularly suitable for experienced cross-country skiers. Soon after passing the Valley Road access, the trail crosses the upstream segment of Pratts Brook via a sturdy footbridge. After traversing a boardwalk over muddy wetlands, the trail passes through a stand of old hemlock and beech, crossing two stone walls along the way.

Beyond the second wall, the loop trail intersects a blue crossover trail from the easterly side of the loop trail and continues on the westerly side of the property up a gentle gradient to the Brewster Lane parking area. A 2-acre park adjacent to this parking area, developed by two Eagle Scout candidates for the enjoyment of residents of the contiguous Audubon senior community, is supplied with benches, a picnic table, and bluebird houses. Plantings of wild grasses, native wildflowers, ground covers, and a young, disease-resistant elm tree enhance this little park.

A winding blue trail with gentle gradient leads from the easterly end of the park into a wooded area and then into the blueberry barrens before reconnecting with the easterly side of the loop trail. Midway, it also connects with an unmarked path across the barrens (shown as blue on the map) that connects with the blue crossover trail mentioned above. Blueberry bushes cover this area and extend into the surrounding woodlands of gray birch and oak. A stand of mature pitch pine and red oak along this area’s southerly boundary gives it the feel of Cape Cod. The barrens—one of a few actively managed open areas in town—is thought to have been created by frequent burning from sparks off passing trains before the diesel era. 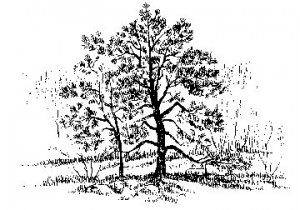 Beyond the Brewster Lane parking lot, the loop trail passes a kiosk and slopes gently down toward the easterly side of the barrens, which it parallels before turning east toward the downstream crossing of Pratts Brook. Here there is a stone ford bridge, a notable historical feature constructed with massive stone slabs laid side by side and supported on stone stacks, which allowed free flow of all stages of water while permitting foot, horse, and wagon traffic to pass on a solid surface.

The blue trail on the northeastern side of the property, which intersects the main trail below the Brewster Lane kiosk and rejoins it just north of the ford, passes between a small pond below the railroad bed and the vernal pools that drain into it during spring high water levels. The pond also has significant vernal pool characteristics. Over several years, a great horned owl has been seen near these watering places, and the area is believed to be home to one or more coyotes, small groups of white-tailed deer, and a red fox.