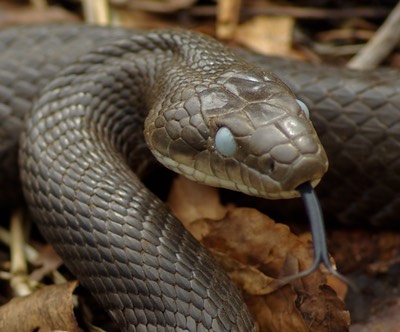 No matter how harmless and beautifully patterned, the sight of a snake sprawled on a shrub or lounging on the pavement near the front door is alarming to most people. Snake photos have been submitted to the Acton WildAware Facebook page by residents who have discovered and wondered about the following harmless common snakes: Garter snake(Thamnophis sirtalis), Northern water snake(Nerodia sipedon),Dekay’s Brown snake(Storeria dekayi) and Eastern Milk Snake(Lampropeltis triangulum). Along with residential neighborhoods in Massachusetts, where they sometimes turn up in yards and basements, native snakes occupy a wide range of habitats found here in Acton, including: fields, forests, wetlands, ponds, lakes, streams, rocky hillsides, farmland, and vacant lots. Within those habitats, snakes may travel along the ground, swim, climb trees and bushes, and venture below ground usually into burrows made by other animals.

Snakes’ bodies are covered with tough, dry scales, either smooth or keeled. The keeled scales have a raised ridge like the keel on the bottom of a boat. Snakes’ underbody scales are called scutes. Snakes’ strong muscles and flexible spines allow them to move along the ground in a few ways; by creeping in a straight line using their belly muscles; bunching and straightening in an S-shaped sine wave pattern and wriggling between obstacles on the ground such as rocks. Snakes lack eyelids and do not see well. They only have inner ears and do not hear sounds they way we do. They depend on their bodies feeling the vibrations in the ground from nearby movement. The snake’s forked tongue is its biggest asset for sensing its environment, hunting prey and avoiding predators. As the tongue flicks out it picks up molecules of matter and pulls them into two slots on the roof of the mouth called the Jacobson’s organ. The diet of snakes varies depending on their species and size and can include insects, worms, amphibians, fish, small mammals and occasionally birds. Snakes are also wary of being preyed upon by hawks, eagles, owls, raccoons, foxes and coyotes and sometimes other snakes.

From the Massachusetts Division of Fisheries and Wildlife, “All snakes receive some protection under the Fisheries and Wildlife Laws and Regulations of the state of Massachusetts. They are protected as important members of our native wildlife communities and as valuable natural resources. None of them may be taken from the wild for purposes of sale. Common species may be hunted, trapped or captured up to a possession limit of two. This “loophole” was deliberately left open so that budding biologists and snake enthusiasts could capture and study a few of the animals if they wished. However, many snakes do not adapt well to captivity. Curiosity can generally be satisfied through a few days of observation, after which the snake should be released in the same place it was found. The Commonwealth is very serious about protecting the priceless natural heritage these animals represent to present and future generations. To report any violations of our wildlife laws, call toll free: 1-800-632-8075. Due to their Endangered Species status, it is illegal to kill, collect, possess or even harrass the following snakes in Massachusetts: Timber Rattlesnake, Copperhead, Eastern Hognose Snake, Black Rat Snake, Worm Snake.”

What to do if you see a snake in your yard or home? Mass Audubon advises, “Suburban yards can provide good habitat for snakes, which may seek cover under stairways, shrubs, wood piles, stonewalls, and dense vegetation. In the vast majority of situations, it’s best to leave the snake alone.  Snakes occasionally enter homes in search of insects or rodents, or a place to warm up or cool off. Try to confine the snake to one room. If there is an exterior door, open it and allow the snake to find its way out. If not, gently sweep the snake into a cardboard box, and release it outdoors.”

Paula Goodwin is a member of the Acton Conservation Commission who introduced WildAware with Acton Natural Resource Assistant Bettina Abe. WildAware is a program sponsored by the Town of Acton Natural Resources Department that began in September and will continue through the summer of 2016. The purpose of WildAware is to educate the community about the existence and habits of wild creatures, and the goal is increased community awareness of shared habitats. For information, call 978-929-6634 or send email to nr@acton-ma.gov.